This was a drama funded by the BBC and Union Pictures, which dramatized the night and preceding hours prior to the Argentine invasion of the Falkland Islands. The project came on the 10th anniversary of the event and garnished special attention/funding from the BBC, which proved worthwhile as it went on to win the BAFTA that year for best filmed drama.
We scouted New Zealand to find locations that would look like the Falkland Islands as well as scout the Falkland Islands to gather photos and measurements for recreating that world elsewhere.  Ultimately it was felt that this special project should use the actual Falkland Islands as a location as it was so unique and so familiar to people from the news.  The Islands are so remote that we had to check to see if they had everything that we might need because if they didn't there would be no quick way to get it there. Literally from paint to screws we had to check what they had and otherwise bring what they didn't with us.  All of our gear and personnel was then flown to the other side of the world on a military aircraft as there are no commercial flights there any more since the conflict. So most all exteriors were shot there in Port Stanley with the interiors built and shot at Ealing Studios in London. The rear of government house had a lot of script pages, with the shooting of the Argentine commandos so we had to do this in the UK. so we found the bare bones of a building that matched and added some extra walls and fencing and paint color to tie it into the exteriors from Port Stanley.
It was somewhat ironic that we were able to scout Government House on the Falklands and take measurements for our set builds as it was undercover Argentine military/secret service that did the same thing 10 years previously under the guise of an architectural project which gave them the intelligence they needed to mount the invasion.
TRIVIA: In this trailer you might notice myself in the Upland Goose scene getting up to leave on the guise of a ferry trip to South Georgia. This ad lib became necessary to get me out of the scene as I had work to do elsewhere!  Others in this scene apart from myself: the producer and 1st AD were used as extras as we could provide continuity of characters in both the UK and the Falklands as it was prohibitively expensive to take additional actors to the Falklands. 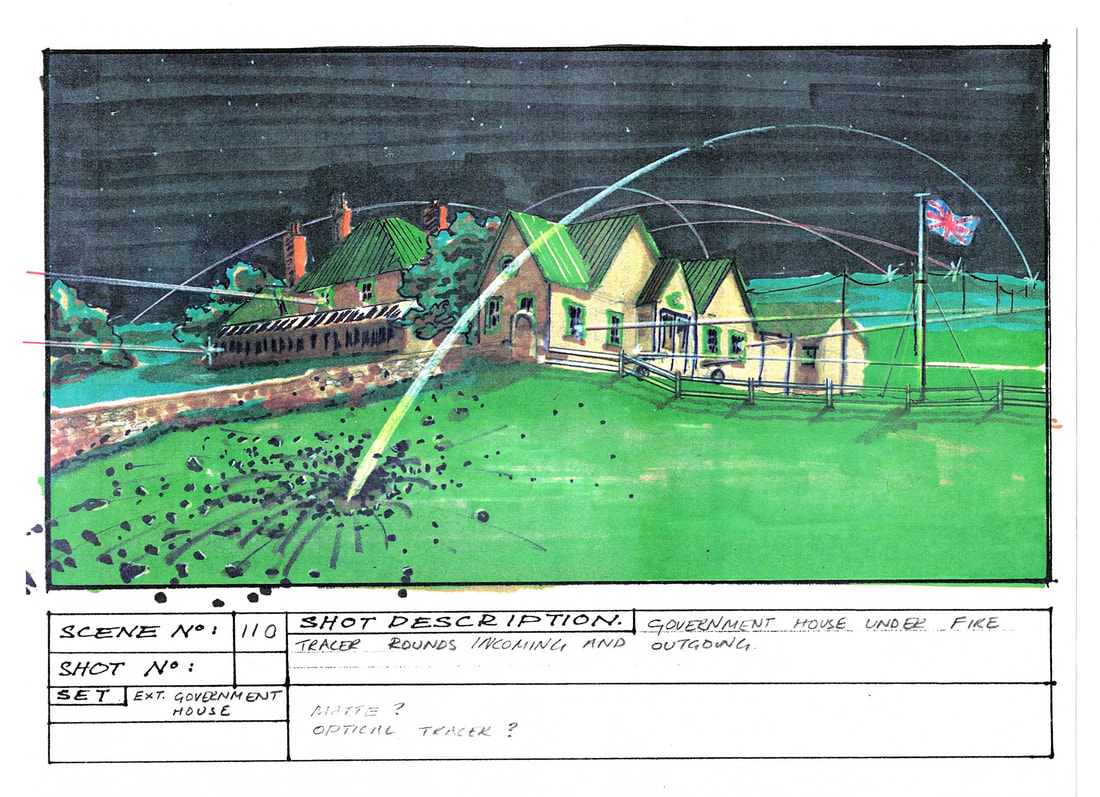 I drew some key frames to help visualize the optical effects that had to be done for tracer fire etc.