"A supernatural thriller that rips apart the boundaries between sanity and madness, between the art of illusion and the terrifying forces of magic. With heart-stopping suspense, masterful visual effects and non-stop terror, it's a riveting journey into the shadowy corners of the human soul."

Set and shot in L.A. and my third collaboration with Mr Barker, this was a complex design challenge in terms of accommodating many special FX sequences. It also involved staging a magic show and designing the gags in it that would rival the best Vegas act ( but on a budget). There were a number of set builds because of their destruction requirements, and for FX rigging. Many of the sets were built to match existing locations. 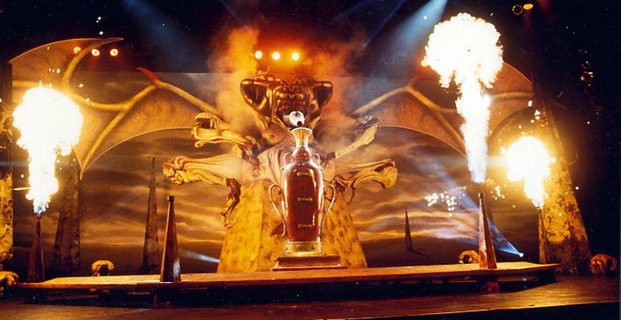 The show for Swann the magician was staged at the Pantages theatre in Hollywood, we tried to create a minimal but impressive set that had the traditional hallmarks of a traditional magic act design. The illusions were designed to be realistic in so far as what you might expect to
see in a theatrical show, without going too overboard with film style special effects that would ironically undermine the "illusion". 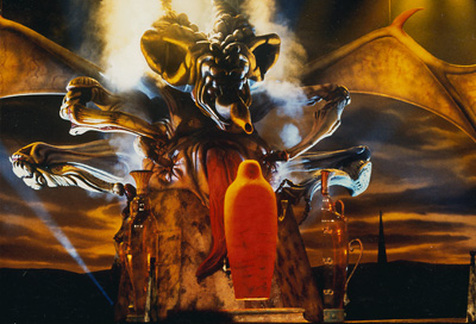 The giant bug with wings, pretty much filled the stage. The gag which introduces Swann the magician was created by the introduction of a clear sarcophagus which flies onto the stage over the audience with a skeleton inside of it, the bug's proboscis fills it with red sand and with a symbolic blast of flame is hardened into a sand block. The assistants remove the clear sarcophagus casing and the block explodes revealing Swann levitating in the air - magic..or illusion?     The design of the bug was two-fold, as it had to be seen to perform its function in the stage show, and then later in a scene under the stage, where it was stored, we see the proboscis used to impale one of our characters, with the red sand flowing like blood. Not only was the effect more interesting, but it also circumvented the censors. 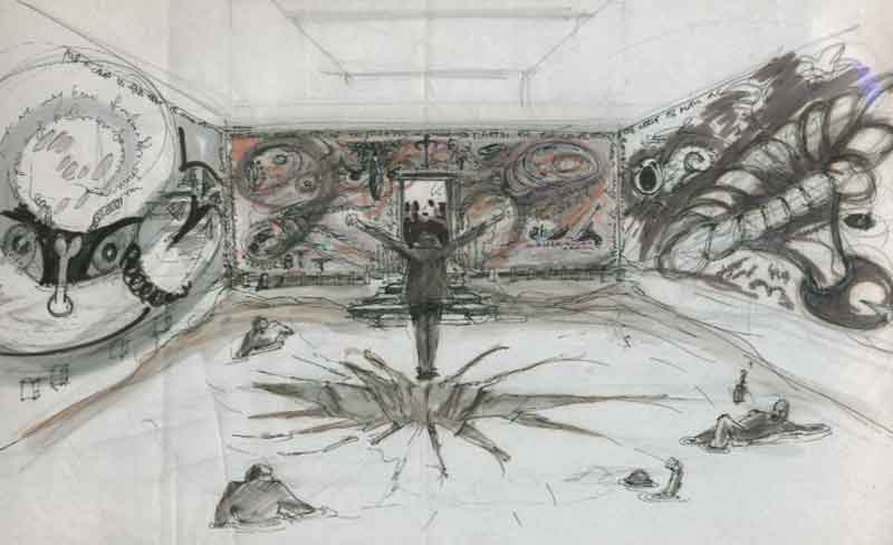 The cultists' home interior was built for obvious reasons, and was linked to an existing house way out in the desert.  The interior was designed to look like the gutted remnants of a house, with floors ripped out to create larger spaces.  The walls are a canvas for poetry and hallucinatory imagery, and the dressing a random assortment of findings.   While there was not much sense of order to the space, it was redressed, as it appears in the film in two different time periods.
In the photos above we see the cultists sinking into the floor as Nix produces a rain storm inside the room. The other photo being the resulting effect of the the dried room after the rain. The room was built up on a platform to accommodate the sinking cast, who slipped through foam inserts to maintain the surface level of the mud. Each chamber they slipped into was its own sealed box to prevent the stage flooding. The rain heads in the ceiling were replaced in post production by a fake sky. The room was then redressed with a jig-saw puzzle of preformed tiles to look like a dried lake bed, and steam was passed through the cracks to help the transition. The hole Nix creates was a combination of a separate set with the collapsing pieces, and a matching hole on the main set above.
Views of cultists' environment.  On right an early Sketch of the "crucifix" or hanging nest of Nix, which was later simplified. 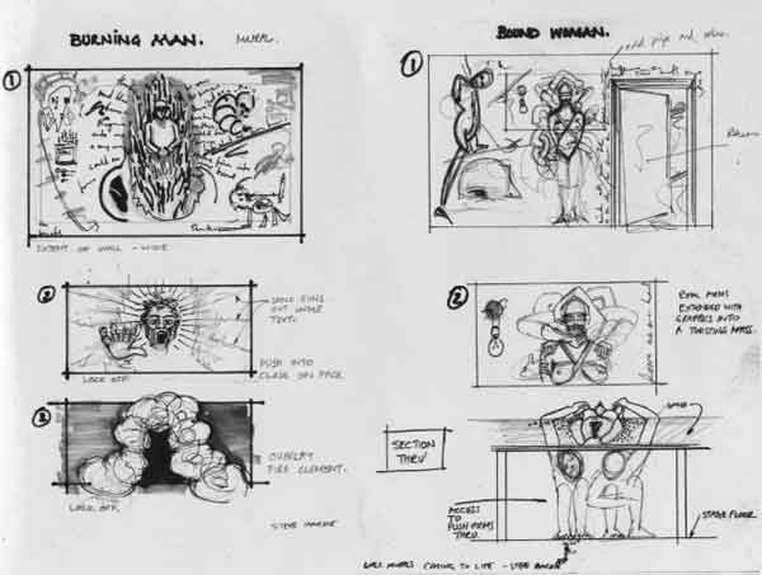 Below is an edited sequence I put together to highlight the design elements in the film.
Theatrical Trailer
RETURN TO TOP OF PAGE