The pilot of Bunker Hill starts the day Walter Wallace gets fired from the Cincinnati hospital he worked for decades. A child patient died because of him. Wrong decision at the worst time. Six months later, he’s still unemployed and accept to visit a hospital far from his home and family in California, one which apparently wants him. And the whole episode consists of convincing him to stay. He’s welcomed by Angie, a geeky Asian programmer who scans his whole body in 3D (!) and the famous James Bell, a young magnetic billionaire, brilliant and totally unapologetic, that I would described as a nicer and crazier Dr House. He rocks. It’s a classic but efficient confrontation between an old-school doctor and a young brilliant mind. They make one hell of a duo.

The hospital itself is a character. We follow Wallace in his discovery of this incredible place, where there is for example a zen garden, where families wait for information about their loved ones in a soothing environment; or an incubator, a real geek’s paradise with high-tech gadgets, a ping-pong table, for the doctors. In every patient’s room, there’s a “wonder wall”, a huge screen where doctors can get all the information they need about the patient, that can turn into anything the patient want when the doctors are away, like an image of a Buddhist Temple or of the earth rising over the moon… All of this is impressive and exciting (and could be costly for the production).
Bunker Hill  looks like the new medical drama we were all waiting for and networks are looking for a long time : it feels fresh, distinctive from what we are used to in the genre; warmhearted, optimistic; incarnate. I really hope CBS will give it a chance, whatever they decide to do with Code Black, which is on the fence for renewal at the time. Clear Eyes, Full Hearts, CBS!
CBS Trailer.
Pdf shows more detailed breakdown of show.

Download File
The main design challenge of the show was to create an alternative hospital environment that felt more spa like than hospital, but still would read and be understandable as a hospital.  Within that we had to introduce high tech and cutting edge technology that was existing or on the cusp of existence but not have it read as science fiction. The show had to be grounded as believable to the point that a viewer may wonder if such a place really exists at this moment in time.  The silicon valley aspect would highlight what could be possible if traditional medicine could be improved with the use of Hi-Tech data analysis, monitoring and mining of big data.  Also, the suggestion that this can all be provided free of charge is both a politically aspiring idea where the stress of medical coverage and care is removed from the equation.

Early concept for the "Incubator set"
The "think tank" area of the hospital was to be known as the "incubator". This space, (along with the actual hospital rooms) had to represent a fresh look at how collaborative science could operate. The idea that no idea is a bad idea and that everyone involved in the process can come together in an open and inviting space with full transparency to discover ways of healing had to be inherent in the design, particularly as the hospital was custom built for this purpose.  This meant having an open space, not small rooms, with a lot of glass and spectacular/inspirational views, along with ping pong etc. and how some of the tech Silicon valley corporations look and feel.  There has been some research that shows that when people operate in an environment like this it improves performance.
As a pilot that had to build a new world, we were not able, financially, to build everything, but the concepts, like that above, would inform our direction and decision making in finding locations that could emulate this.  Initially it seemed that we would look at modern hospitals but realized that they fell short in this regard as they all looked like the familiar and expected, so it proved more fruitful to look at other spaces, hotels, museums and modern architectural spaces that would open up to new possibilities.  While not hitting every note, we eventually settled on the Herman Miller Furniture showroom for this space, it had already incorporated a collaborative work space aesthetic, was open with lots of glass (which we also added to with floating panels of glass).
Rooms and hallways
The hospital rooms became a build, not just because of the page count to shoot in them, but because what we wanted it to look like didn't exist in the real world.  So here we were able to more fully present a look and design that reflected the new hospital philosophy. Using cement finishes in bold modern architectural ways along with wood accents to warm it up, the corridors and the rooms off of them all had glass walls. This was both to continue the theme of transparency and to allow patients the ability to see out of their rooms and others to see in, with the option for privacy when needed.  The rooms were to feel more like hotel/spa interiors, each with a garden.  The glass on the inside would become a giant TV monitor to both bring up medical data as well as beautiful images if the patient wanted to feel like they were on a beach for example.  The opaque color on the corridor side was specific to the area of the hospital, using color to help staff and visitors navigate areas of the hospital. Using top and bottom channels in the gimaballed glass panels we could switch out color, make transparent or opaque white for versatility.

SU sketch render of room. Panel to side of bed opens as needed for oxygen etc. 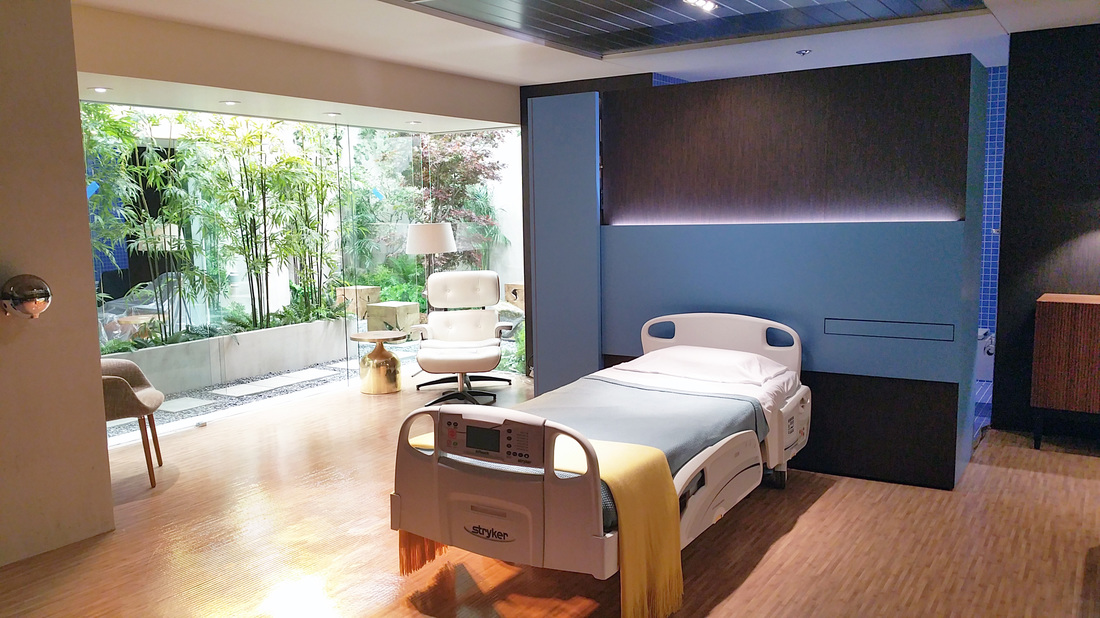 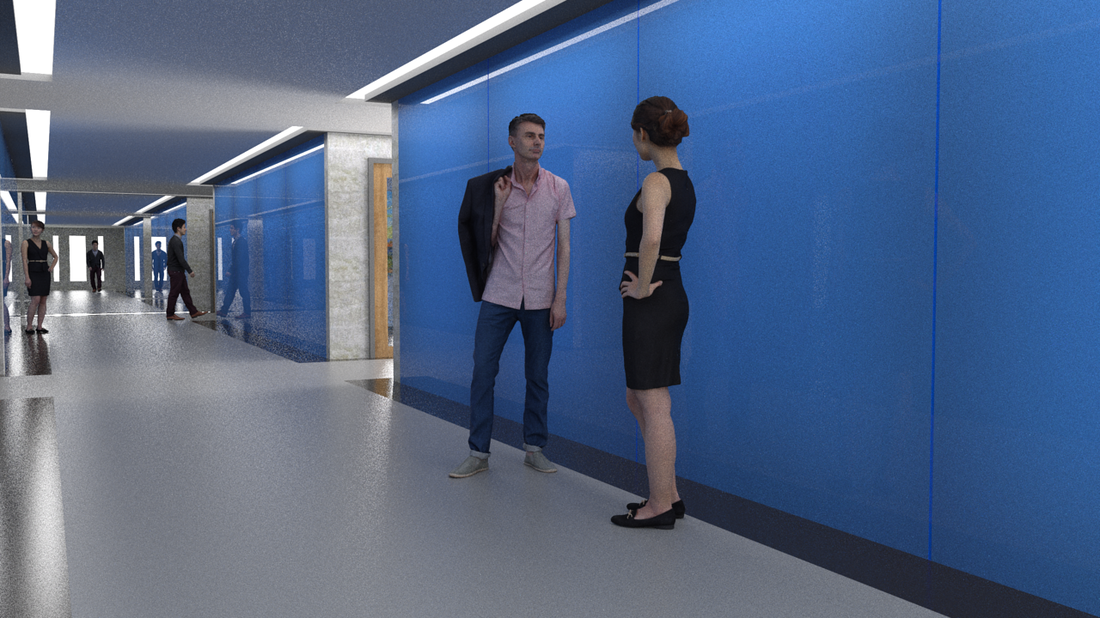 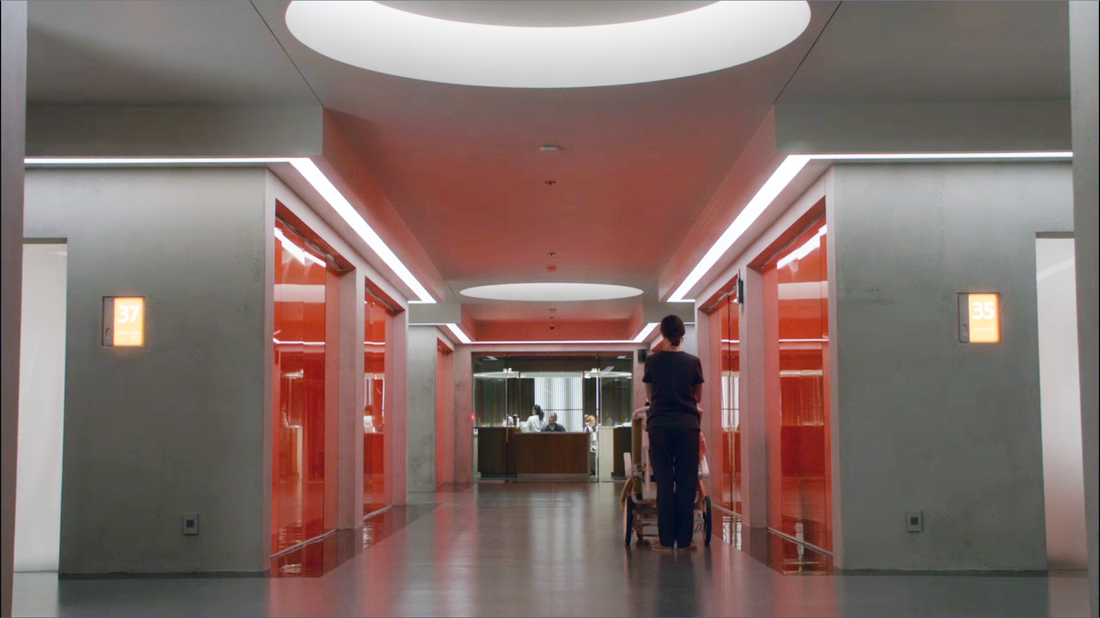 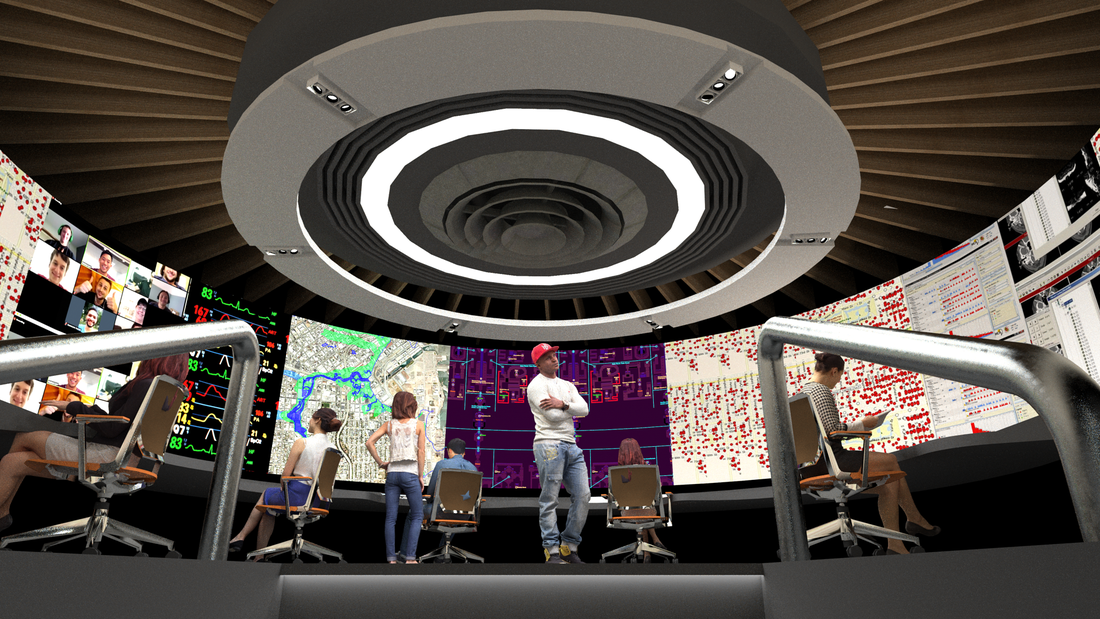 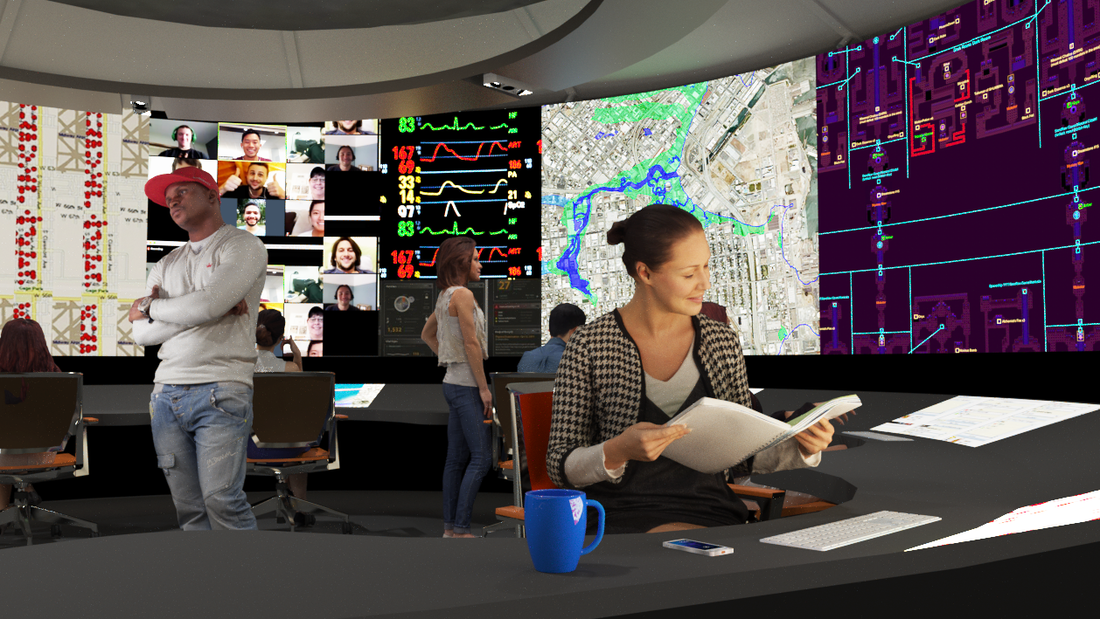 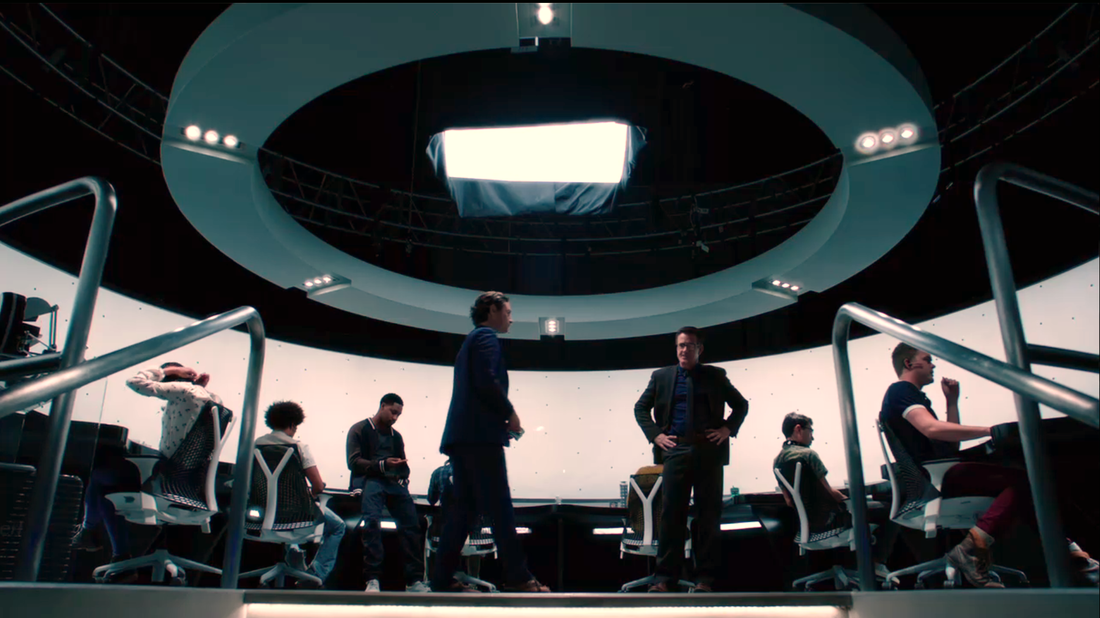 Set still of shooting. Luminance key from screen to be used to key in graphics in post. 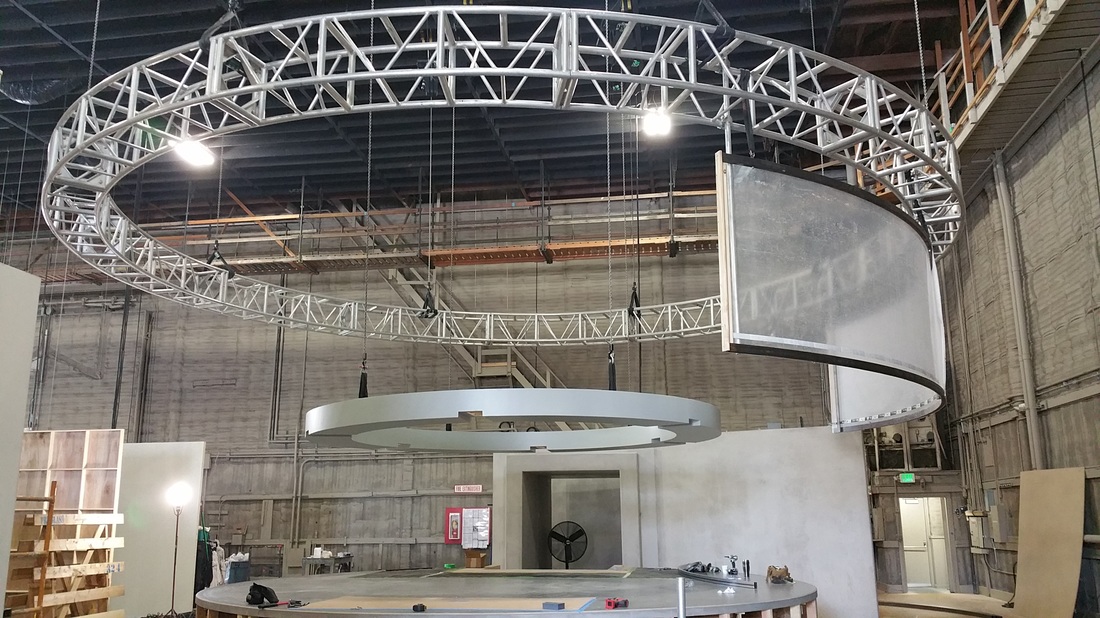 Build in progress on stage at Universal Studios
The E-HUB was to be a monitoring facility built around a 360 degree screen (the pay off in the pilot being that the guy brings up a 360 immersive game.)  The final cut lost this scene so we never got to fully appreciate the 360 visual, however the space gave a high tech look to an otherwise conventional monitoring station with multiple monitors. The design, even though it reflected the requirements of the script, was often feared to be too sci-fi, but once populated with regular people, doing regular things, the design aspect was less apparent than when seeing it in isolation. 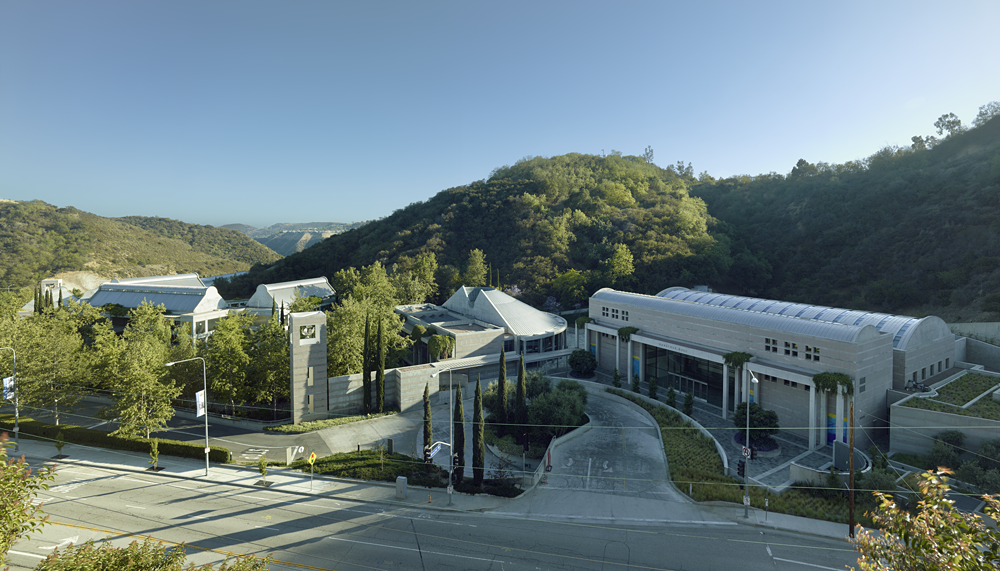 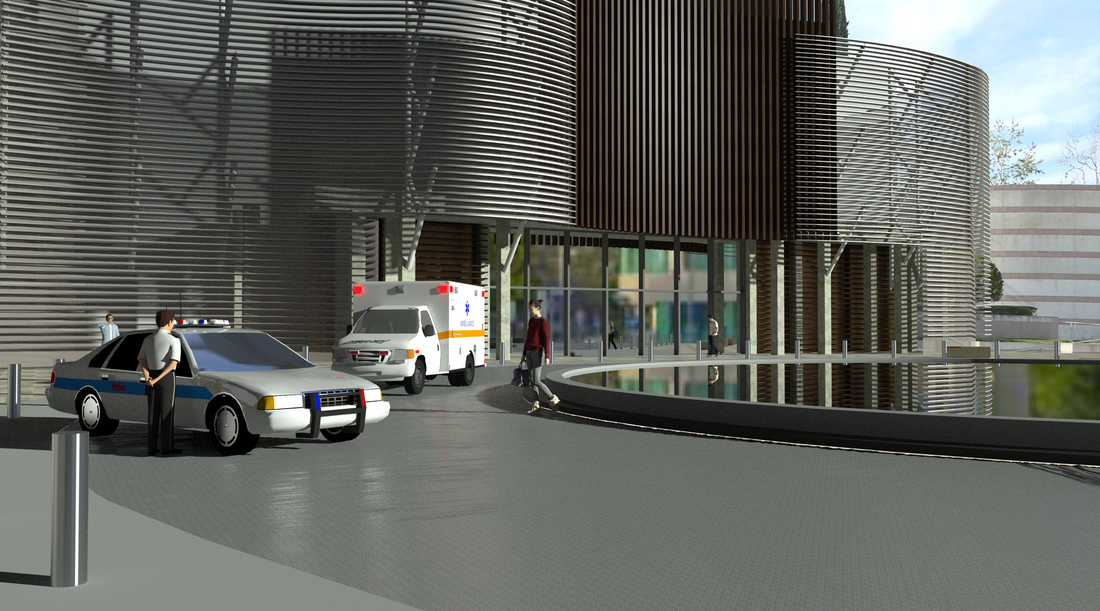 We used the Skirball center (left) as the hospital campus but the architecture looked a little too 80's and not as it was supposed to be in the script which was newly built.  I did these concept renders (right) to wrap the building in a different more contemporary texture with the addition of a vehicular access circle which didnt exist as well as a reflecting pool. 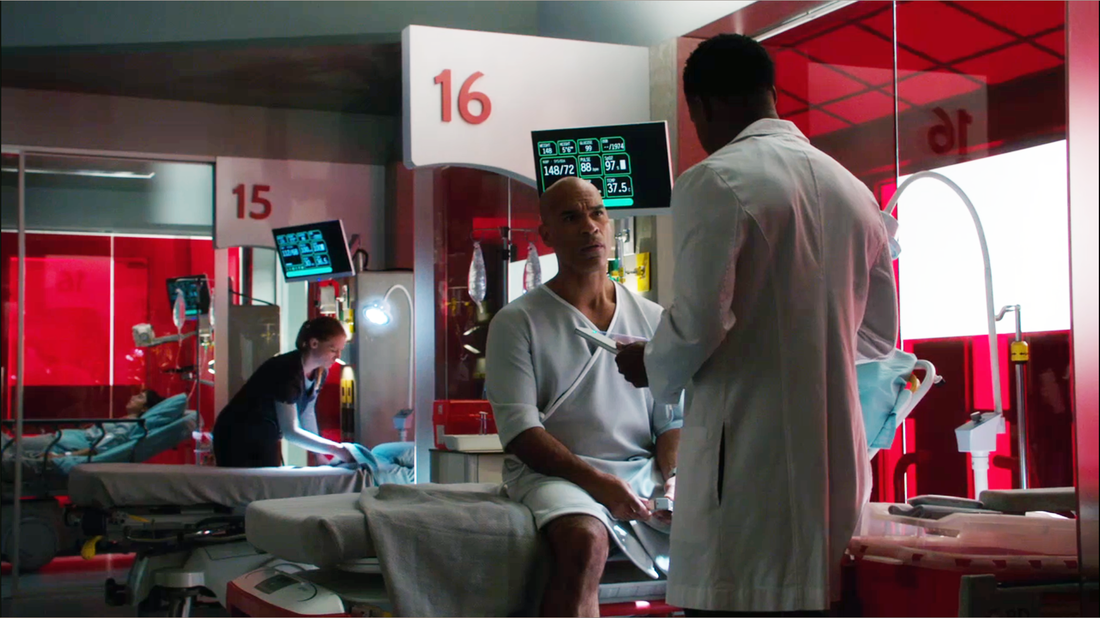 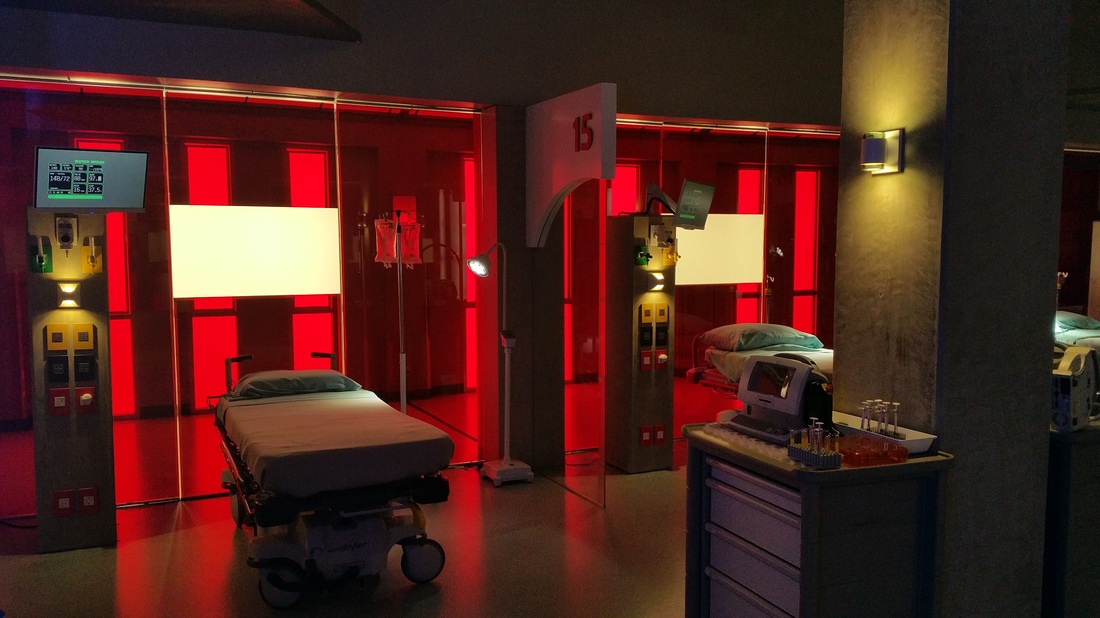 Above, set stills of ER.
top of page