After the success of last year's campaign we were engaged to do another round of spots for Block. One of the real tax advisors from the previous ads was chosen as the sole and key representative of H&R Block, and even his personal green bow tie has become symbolic of the brand.
The main thrust of this year's campaign was to focus on the "Billion Dollars" of unclaimed taxes that people could retrieve....if they work with Block.
To illustrate this we had to create a Billion dollars of cash money which would serve to illustrate the scale of this problem.  Personally I favoured using single $1 bills to create the maximum effect, which would of amounted to 1200 pallets of money, each approximately 4 feet high as they had to occupy the space of a football stadium and the deck of an aircraft carrier.  The agency and client settled on $20 denominations which amounted to 50 pallets of money. Initially it was considered that we make a few pallets that the talent could interact with and composite the rest in post production....however Errol prefers practical when possible so I figured out a scheme to create the 50 pallets which would require no post effects. What at first seemed like a simple task actually turned out to be a very tricky endeavour.

Approaches to creating these pallets posed many problems, even creating a central hollow core on each of the pallets and stacking money around them would of meant generating cut paper of a bill size and facing with fake money.  Estimated costs for doing this would of been $350,000 !! so another approach had to be found. It seemed like we had to "wallpaper" boxes of the right size with graphics, but I felt that would look too clean and unreal, especially when mixed in with a few real pallets of money that the talent interacted with.  The solution I devised was to print the stacked money pattern onto horizontal strips of gator board which when assembled could be offset into slightly random arrangements giving each pallet a unique look of its own.  Warner Brothers graphics printed 150 8' x 4' sheets of gator board and then cnc routed them into strips.  Each of these sets of strips was mitered at the corners to produce the final pallets. The key finishing touch to this was to then shrink wrap them so as the resulting obfuscation and highlights from the plastic wrap sold the illusion. Each of the pallets was rigged with castors so they would be easy to move around.  Both in a football stadium and on the deck of an aircraft carrier.

Sample band of printed money. This is a double height band and we made single and quadruple versions too. 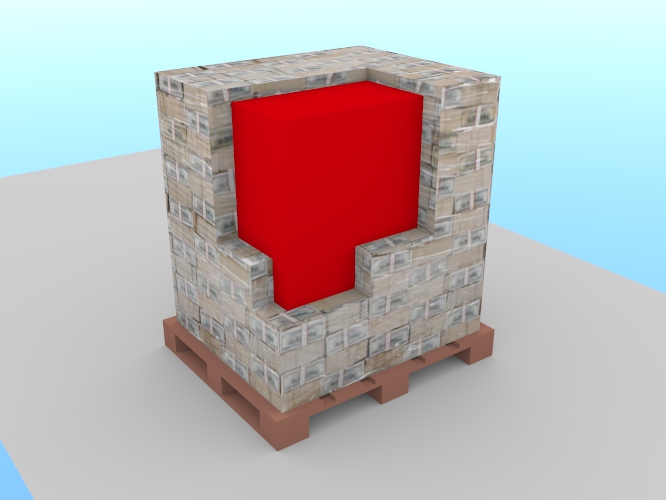 simple graphic of original idea to wrap a hollow core box with cut paper / printed bills. We made a few like this for the actor to sit on. The rest had to made differently for cost. 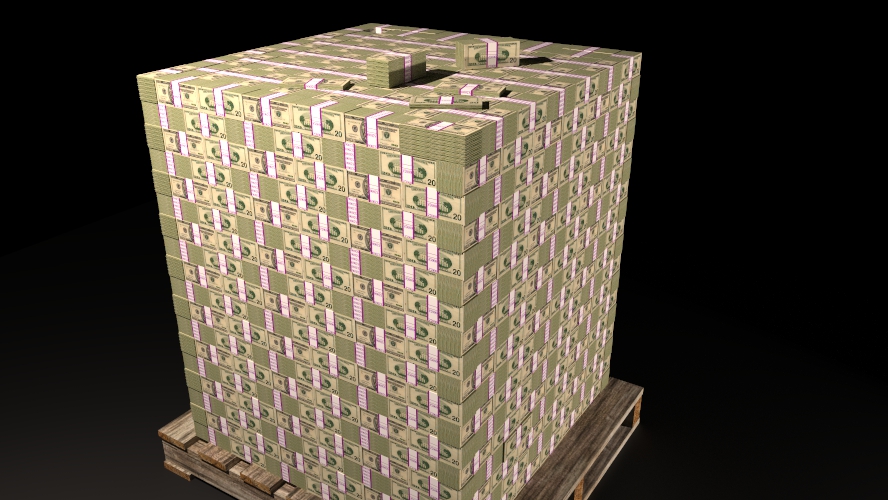 Computer render of stacks to show money pattern. I felt we could not "wallpaper" the boxes/stacks like this because they would look too perfect and hence fake.

The solution to making them look more real/organic was to print graphics as stips. This schematic shows how the strips of graphics were built and arranged. They were hot glued together imperfectly, twist each layer a little bit and mitred at the corners to give an organic feel to the stacking. 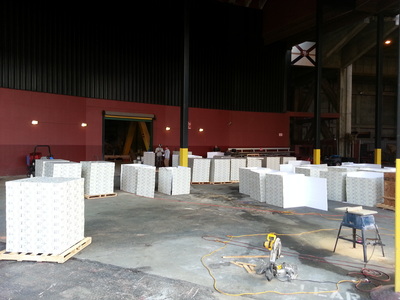 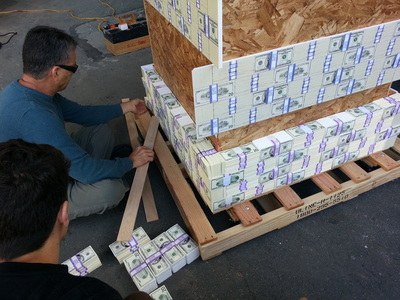 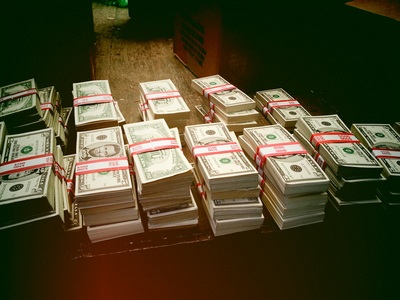 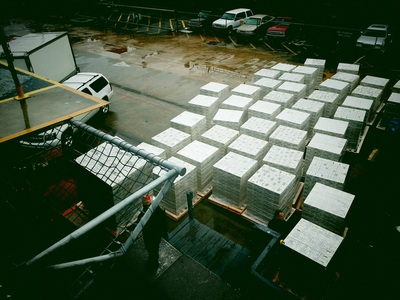 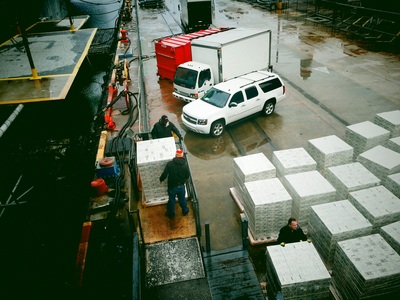 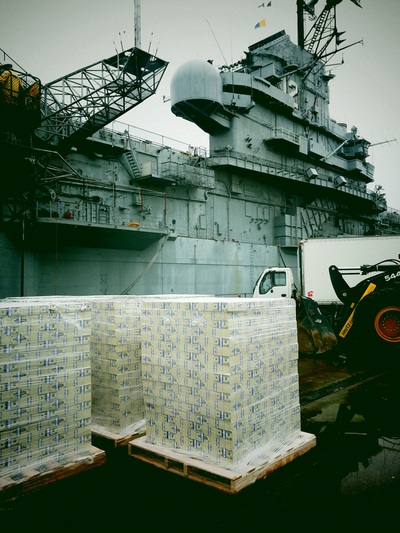 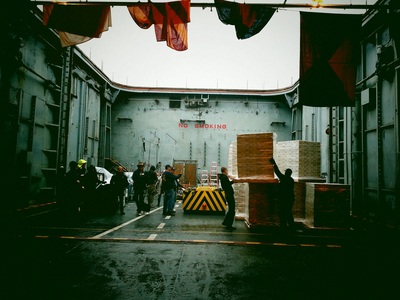 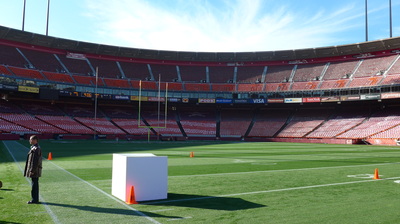 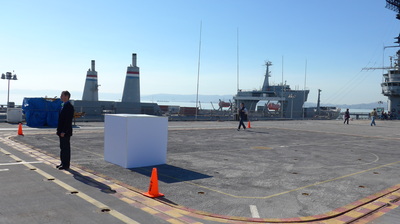 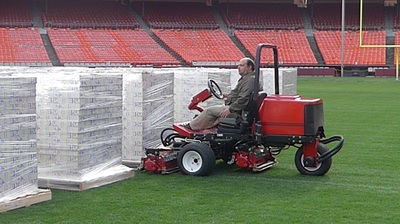 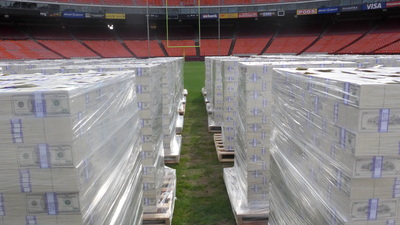 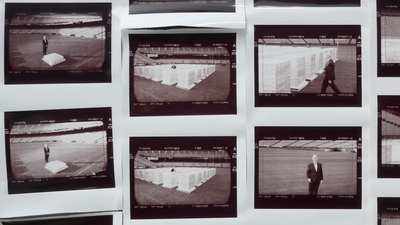 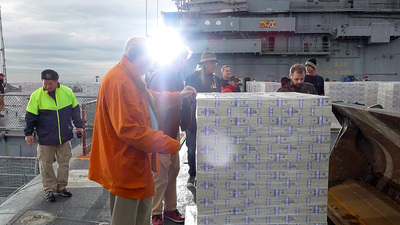